Our pear brandy is an eau de vie, totally dry, fermented entirely from pears grown in Oregon.  It takes about 20 pounds of fruit to produce a single 375 ml bottle.  We have made pear brandy from 5 or six different varietals, exploring the story each pear has to offer.  Our rarest brandy was made two years ago from a single bin of Golden Comice from Well’s Orchard in Hood River, a rough looking pear, shaped like the Comice (pictured below ) but with a skin like a Bosque pair, rough and almost hairy.  It had a wonderful honey-like sweetness.  we only produced 20 bottles, and they are long gone.  Perhaps we’ll try them again in a future year. 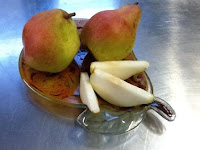 We currently have two different pear eau-de-vies:  Comice and Bartlett.  They are fun to taste side by side to see how completely different two pears can be.

The Bartlett pears come from EZ Orchards in Salem and from Wells Orchard in Hood River.  Bartlett pears are the most commonly distilled pears in the world, and go under the name of  “Williams” pear in Germany, Switzerland, and France.  They have a distinctive ester that accounts for a very strong & bright pear nose right up front.

The Comice pears were grown for us by EZ Orchards- and were kept on the tree 10 days longer than the normal commercial harvest.  Those ten days created enormous and beautiful fruit with exceptional sweetness.  Brandy from the Comice is more subtle than the Bartlett-  the pear nose is subdued and the flavor tends to emanate from the back of the mouth, rather than the tip of the tongue as with the Bartlett.  It’s sweetness manifests itself honey-like.

The brandy is bottled in 375 ml bottles.  Either brandy is wonderful chilled and served neat, or can be served in a cocktail. Several cocktail ideas are found below: