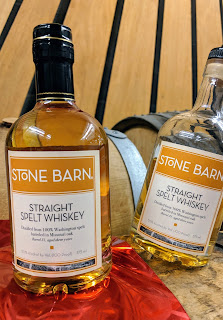 We’ve just released a straight Spelt whiskey, Barrel #31. The mash bill for this is 100% Spelt, grown in Washington State, and sourced from Bob’s Red Mill in Milwaukie Oregon.  We made this whiskey in January, 2014, and put it in a 30 gallon new Missouri oak barrel manufactured by A & K Cooperage in Higbee, MO.  This whiskey is three months shy of 4 years old.

Barrel #31 is Stone Barn’s 3rd release of Straight Spelt whiskey-  Barrel #6 and Barrel # 10 were released in 2012 and 2014 respectively.  We’ve always appreciated the grain expression of the spelt- sweet, but decidedly more interesting than its more cultivated relative wheat.  During the mashing process it has a distinct and unusual asparagus aroma, which totally dissapears after fermentation. However, spelt maintains a slight and pleasant grassiness as a distillate.